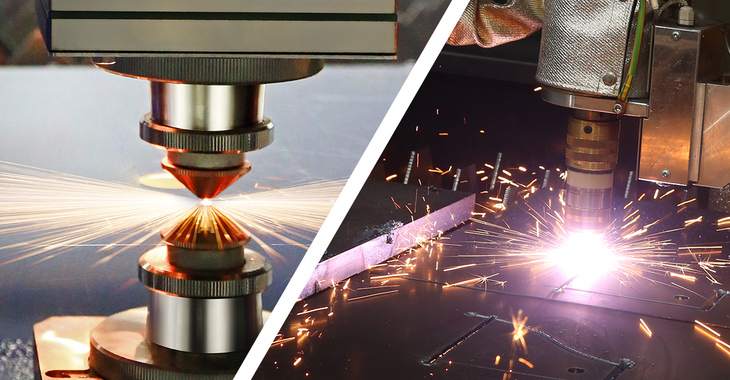 The principle of the fiber laser cutting machine

Fiber laser is based on optical fibers. The pumping diodes amplify the initiating beam which is guided over a thin optical fiber.
The principle of the plasma cutting machine
The way plasma works is a bit more complicated. Plasma cutting machines heat the gas so much that it is hot enough to melt the metal. Then, when the metal is sufficiently heated to melt, it is blown with gas and the material is separated.

Plasma cutting is used to cut each kind of steel. Mostly it is used to cut metal sheets of medium thickness. It includes reflective metals such as aluminium, copper and brass (which in turn is problematic for laser cutting machines).
Its main advantages are fast cutting speed, narrow cutting gap, small heat affected zone and low operating costs. The greatest disadvantage is that there is an angle of 0.5-1.5 ° in the vertical section and the hardening notch.
The initial investment in equipment is much lower than that of a laser, and the subsequent maintenance cost is also much lower. While the investment in a fiber laser cutting machine costs a minimum of one million zlotys, a plasma cutting machine can be bought up to 10 times cheaper!
Laser machines can cut all kinds of materials. The material you can cut, however, will depend on the type of laser machine you have. The CO2 laser machine cannot cut through reflective metals such as aluminum, copper and brass. However, they can cut through non-metallic materials such as wood and plastic.
Fiber lasers can cut through reflective materials if they have enough power. They can cut through any type of metal with enough power. They will only be limited by the thickness of the material.

When it comes to cutting, various fiber laser machines are more efficient at cutting thin metals. The fiber laser machine can cut thin metals up to 25mm efficiently. To cut metals with a thickness of more than 25 mm, a large amount of energy is needed, which, incidentally, is quite costly.
Plasma, on the other hand, can effectively cut any type of metal up to 80mm thick. Interestingly, when cutting thicker materials, the plasma can start cutting faster than the laser.

Fiber laser is a machine whose price starts at 800,000. zlotys and above. The cheapest plasma cutting machines cost around PLN 100 - 150 thousand. zlotys. It all depends on the manufacturer, components, additional equipment and its power.
The costs associated with the cutting machine, regardless of its type, do not end with its purchase. Over time, there are operating and maintenance costs. Consideration should be given to energy consumption, maintenance, consumables and service costs.
Plasma cutting machines require more maintenance over time than lasers. Plasma cutting machines have more parts to replace. They will also require more cleaning than laser machines. However, they consume less energy than lasers.
With a laser, the real value comes from the speed of production. If you can cut multiple parts in less time, you'll get more money for your time invested. So, if the production rate is high, the laser machine can still be great despite having high operating costs.
The exception is the cutting of medium and thick sheets. At this point, the laser becomes less efficient. The laser cuts medium to thick plates more slowly. Interestingly, plasma can be much faster than laser when cutting medium to thick plates. The thicker the metal, the better the plasma is compared to the laser.