Situation and development trends in the sector of CNC cutting machines

CNC cutting machines only outwardly do not change. In fact, this sector is strongly based on innovations which are still implemented in new devices. However for this time there is no chance to appearing new cutting technology, development focuses on optimizing of parameters which decide about attractiveness of device for user. The best solutions are included by patents because they warrant achieving of uniqueness of producer and have influence for competitors.

Tracking changes taking place in the best producers offer which are available on polish market, there is simply to guess CNC cutting machines sector divides on two groups:

Current situation in CNC cutting machines can be characterized by many indicators. There are for example: machines quantity, producers amount or sector profitability. In 2014 there were 335 companies which declared basic activity in cutting machines sector. This number was 7% higher than year before. According data from Central Statistical Office there are generally micro companies (78%). On drawing 1. there is presented companies characteristic according of employees quantity. 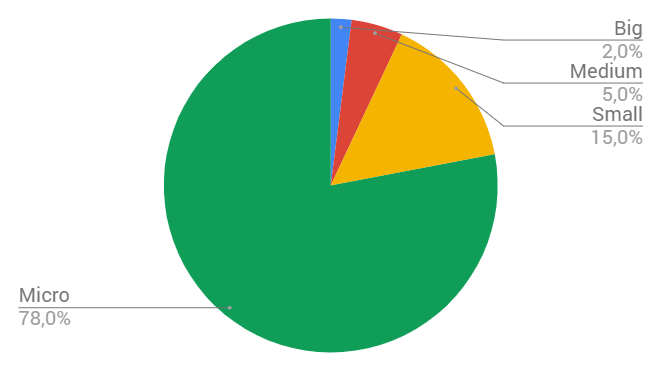 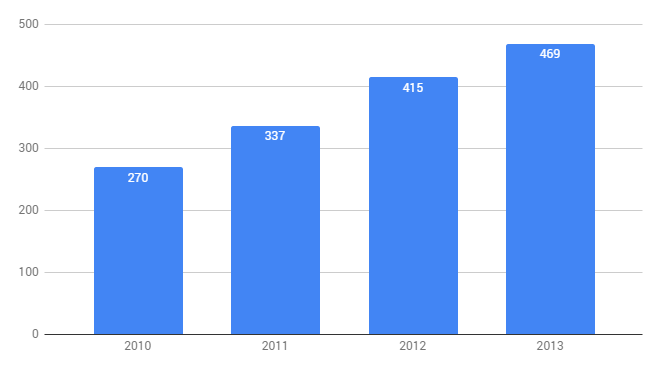 Tooling machines sector in relation with other industry sectors

With reference to Polish industry processing, generally, sector of CNC tooling machines is about 1,5% of value. It is characterized by lower than average added value and it is less than 1% of total industry production value in Poland. However, you should be aware this statistic does not include sector variety and its major representatives. This sector scores may be reflected  in many other branches of industry.

In September 2017 there was made research for specifying condition of cutting machines market. There specified also how often there is used each cutting technology in industry companies in Poland. Research consisted of questionarring of chosen companies. Questionnaire was  sent via e-mail and traditional mail for companies typed from maintained and still actualized database by Welding Institute. There obtained more than 100 answers. Companies which took part in research are in 15% small companies, 29% middle companies, 56% large companies. Questionnaires results were base of more than half of following analysis. Among all of analized companies each one implemented at least one of specified in table 1. quality system or permission system. Almost 70% of companies implemented ISO 9001 system and ISO 3834. Others implemented in companies norms are presented in table 1.

Tab. 1. Used in company system of quality of permission

These high values are reflected in quantity of bought devices by researched companies in last 5 years. On first place there are devices for MIG/MAG welding (65%), on second there are devices for TIG (48%), while on third place are devices for plasma cutting (almost 19%). There were also bought devices for oxygen cutting (10%) and for laser cutting 2D (8%). In case of robotic solutions and amount of robots used in welding and similar processes, among analyzed companies the most popular were welding robots for MAG welding (36%), on second place there were robots for cutting (16%). In case of technologies with laser using, cutting was on first place (87%).

Development of cutting machines of materials is heading towards product quality increasing, efficiency increasing but everything is changing with keeping care for economic factors and for environment. Besides of need for automatic solutions in range of cutting technologies, till this time high investment price was independent and reason for making decision of investment. At this moment there is improvement visible in this range.

Entry level cutting machines are dedicated primarily for micro, small and middle companies which are 99,8% of all companies. They have only basic functions and are characterized by small working size. But they keep high efficiency by suitable optimized parameters. Additional advantage of entry level cutting machines can be their expand and extension of their functionality. This option is especially useful for companies which develop but are not ready for total change of machine park elements.

High-tech machines are the mostly interest of big companies, units of hard industry and companies functioning in range of narrow specialities which need the best solutions. These devices are characterized by the strictest parameters values and often have different kinds of hybrid solutions.
Among both machines groups there are developed new solutions for parameters optimization. Presently this is group of several dozen features which value can be conditioned by legal provisions, customers individual needs or desire of getting suitable value of another, conjugated parameter. There are specified below parameters which the mostly are object of customers interest:

Actions taken for improvement of described features results in implementation of new solutions in CNC cutting machines. Some of innovations like described machines with very high laser power became “visiting card” for companies which used solution as first.

Another example of innovation that became important element of producer offer is also plasma cutting head Vortex 3D. It presently works as Vortex 3D FL (device is improved by reducing weight and higher dynamics). Most of used till 2015 solutions in CNC cutting machines made possible to cut plates and pipes at right angle. But often there was necessary to bevel edges for welding. Developed, patented by Eckert company plasma cutting head Vortex 3D wit RACT system (Real Adjusted Cutting Trace) was in 2015 until today one of the most modern devices on market. Cutting head allows rotation +/- 540° that provides cutting out of complicated contours without interruption machining. It can be also smoothly tilted during tooling up to +/- 47° from vertical plane. It allows then for very precise beveling and chamfering of sheets during one cutting process.

It deserves attention also Drop&Cut system that is a tool that allows for efficient using of cut material. On controller display, during cutting process, operator can live control, position and match specific plate section. New element production is based on the principle of using entered in cutting machine system new cut part geometry. It is enough to move the virtual geometry of the cut part with the finger to the remaining material. Due to constant live transmission, outline of contour of cut part can be flawlessly made of remains of sheet from previous process.

Besides division for compact and high-tech machines, there is probably inevitable to use Industry 4.0 elements. These elements will be present in both machines groups.

There is also observed trend for hybrid machines construction. They are functional connection, for example cutting machine, drill, punch marking machine within one device or connection within technologies. Example of this machine is CNC cutting machine Opal Waterjet Combo produced by Eckert that is able to cut with plasma and with water within one cut element.

Market of CNC cutting machines is constantly changing. It deserves recognition polish brands become more and more popular and their products more and more willingly buy by foreign companies. Machines offer will undergo an ever increasing division for compact and high-tech machines. New innovations will focus on parameters optimization. More and more visible will be also influence of Industry 4.0. Changes will be faster. Constructors still overcome barriers that until recently seemed unbeatable. The only reliable indicator of changes will be customers expectations. Generally new products will be the mostly based of individual customer needs and developed especially for them.